Engage: What Are the Chances?

What are the chances that you were born a boy or a girl? Would you say a 100% chance? 50/50? What does that really mean? Let's use a penny as a model for gender selection. Think of heads as a girl and tails as a boy. 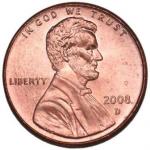 When you flip a normal coin, y 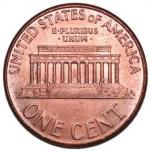 ou have two possible outcomes, heads or tails. That means that for every

The video below demonstrates how to determine probability of gender inheritance using a Punnett square instead of a penny.

Occasionally, there are additional issues of inheritance based on gender. For example, more males than females are color blind. The trait for color blindness is determined by a gene on the X chromosome. Females are often carriers of the trait but aren't colorblind. Males who carry the trait are color blind. Click sex-linked traits to investigate the probability of inherited disorders linked to the X chromosome. The link opens in a new window. When you're finished exploring, close the window to return to the resource. 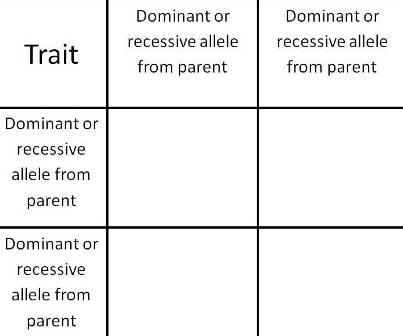 A Punnett square makes working out the probabilities of inheritance easier. It is a boxed grid that lets you separate the versions of a trait, or alleles, from both a male and female organism and sort them into possible combinations. Basically, it's a simplified model of conception outcomes.

Take a look at the dragon family below. Who does the baby dragon most resemble, his mom or dad? Focus your attention on two traits in particular: the presence of horns and the tips of the scales. It's pretty easy to see who he inherited his horns from, but how did he get round tip scales when his parents don't have them? 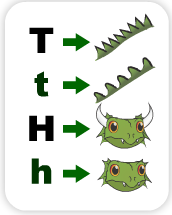 Physical traits, or phenotypes, are determined by genetic traits, or genotypes. For example, notice that the dragon dad has horns but the mom does not. The gene trait for horns is represented by the capital letter H. Daddy dragon's genotype has two possibilities, HH or Hh, but only one possibility for his phenotype of horns. Mom's phenotype of no horns lets us know that there is only one genotype, hh.

Let's use a Punnett square to calculate the probability of inheriting the genetic trait that codes for the presence of horns. Download and use the document titled "Dragon Monohybrid Crosses" or copy the Punnett squares below onto your own paper. 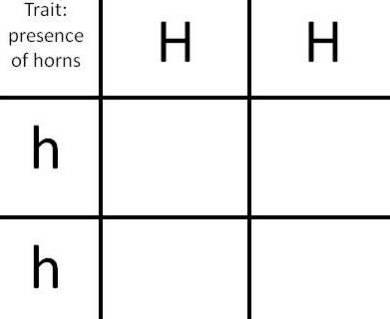 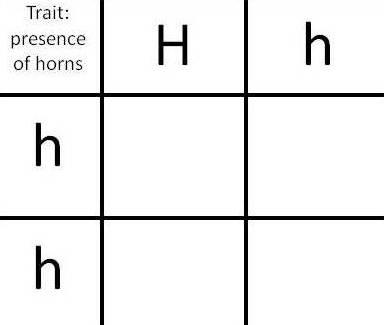 Drop the top letters into the boxes below and slide the side letters into the boxes going across. Always write the capital letter representing the dominant allele first. Separating the alleles into the outer boxes represents Gregor Mendel's law of segregation. Mendel, the father of genetics, recognized that half of inherited DNA comes from the female and the other half comes from the male. The actual separation of chromosomes occurs during the last stages of meiosis. Each of the side boxes represents the possible genes carried by an egg or sperm. The inner boxes represent the possible gene inheritance in a fertilized egg. 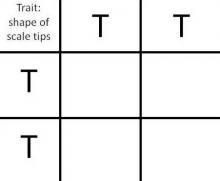 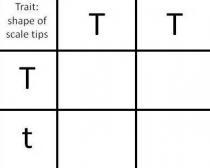 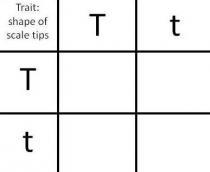 Congratulations to the dragon family on the new addition to their family. They don't know if it's a boy or girl, but we can assure them there is a 50/50 chance for one or the other. They do wonder, however, if the new baby will have the same traits as its brother or if they will look different. It's up to you to help them figure it out.

You've had a chance to work out the probabilities of inheritance for the baby dragon's traits for horns and scale tips. Now let's see what the chances are for the newborn's inherited traits.

Genes sort independently of each other. This means that in the case of the dragon family, the inheritance of horns is not dependent on the inheritance of scale-tip shape. Also, remember that the alleles for a genetic trait separate from one another during the formation of gametes or sex cells. Watch the video animation below to find out how Gregor Mendel, the Father of Genetics, reached these conclusions.

Elaborate - It Gets More Interesting 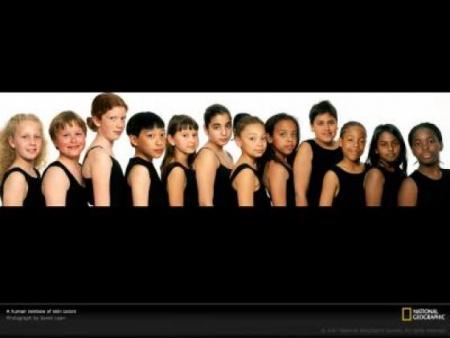 This photo is courtesy of the National Geographic Society.

Examine the picture above. Isn't the variation of skin pigmentation amazing? Would you think that inheritance of skin color is determined by simple dominance or some other factor? Skin pigmentation, like hair and eye color, is an example of polygenic inheritance. What does that mean and how can our skin color be so varied? Click "Polygenic Inheritance Activity" to open an investigation that will help you to understand the inheritance of skin color. Before you start, check your pocket for pennies.