When you are working with the probability that an event could happen, that is called theoretical probability.

For example, when rolling a typical six-sided number cube, there is only one "6" on the cube and an equal chance of any number landing face up. 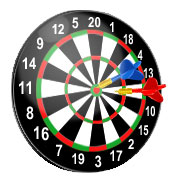 There are other types of probability. Sometimes, a simulation or a series of events has already occurred, and there is data that can be used to make a prediction. If you are estimating probability based on data that has been collected, it is called experimental probability.

For example, if a dart is randomly thrown at a dartboard 40 times, data can be collected based on the numbered sector in which the dart lands.

Working with both theoretical and experimental probability is important, since frequently in the real world, what should happen, and what really does happen, are quite different!

In this section, you will use a spinner simulator to conduct several "spins" in order to compare theoretical probabilities with experimental probabilities.

Use the "Spinner" below which has three equal-sized sections that are blue, red, and yellow.

Assume that the areas of each sector of the spinner are the same.

Repeat the process with the same spinner for a total of 100 spins.

Solve the proportion that you set up in order to determine the answer to the original question,
How many students would be expected to prefer listening to country music?

1. The probability that one wristband is defective is . In a case of 840 wristbands, how many would be defective?

2. Benita observed that 28 out of 55 patrons at the public library used the computer. The librarian told Benita that 660 patrons enter the library throughout the day. Based on Benita's observations, how many patrons during the day would be expected to use the computer?

3. Clayton selected number tiles out of a bag. He recorded his results in the table.

Based on these results, if Clayton draws 100 tiles, how many odd numbers should he expect to draw? 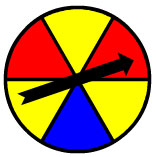 Making Predictions
You can also use theoretical and experimental probabilities to make predictions from situations by treating them like proportion problems.