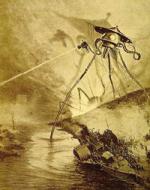 On Halloween night in 1938, many residents of New Jersey thought the country was being invaded by Martians. Hysteria spread as many people huddled in cellars, crowded the roads, and went so far as to wrap their heads in wet towels to protect themselves from the poisonous gas of the Martians. They had mistaken a radio adaptation of the science fiction novel War of the Worlds by H.G. Wells as a real Martian invasion.

That night is a dramatic example of what happens when people are given misinformation (or in this case, noninformation) and believe that what they’re seeing and hearing is real. Writing about the events of that evening, newspaper columnist Dorothy Thompson saw that the broadcast revealed the way dishonest leaders might misuse the power of mass communications to create illusions and manipulate the public.

All unwittingly, Mr. Orson Welles and the Mercury Theater of the Air have made one of the most fascinating and important demonstrations of all time. They have proved that a few effective voices, accompanied by sound effects, can convince masses of people of a totally unreasonable, completely fantastic proposition as to create a nation-wide panic.

Most of us probably roll our eyes when we read about this story and think about how much more sophisticated we are in today’s world. We think we would know better than those poor people in New Jersey almost 80 years ago because we have more resources at our fingertips: TVs, computers, social media, 24-hour cable networks, etc. However, are we better off and more savvy, or do we have a different kind of problem in our world?

People in the 1930s had limited resources when it came to finding out whether they were actually being invaded by Martians. Today, however, we have the opposite problem: too many resources. Special skill is needed to read all the resources about a given topic, synthesize that information, and finally, make an informed decision. While you probably won’t have to decide whether the earth is being invaded by Martians, you will need to read, synthesize, and make logical connections and decisions about what you read and hear. You will need to use these skills for many kinds of issues and topics. In our busy world, you need to be able to sift through mountains of information to decide what is accurate and what is not.

You do this every day when you read the newspaper, watch television, or use social media. You have to make comparisons and choices about what you read and hear, holding on to some information and discarding other bits. You learn early (often in the cereal aisle of the grocery store) how to figure out which advertisements are worthy of your money and which are propaganda and not worth your money.

Source: Reading a book in the sunshine, and pretending that I don’t even care if anyone is watching me ..., Ed Yourdon, Flickr

The decision-making skills you employed as a child while shopping for Cheerios or Fruit Loops helped you practice sorting through information, dissecting it, and making decisions and choices about it. That was just the beginning, yet it shows how important learning to read accurately and synthesize information is in today’s world.

In this lesson, you will expand on your ability to read texts, synthesize them, and make choices based on the information you read. Finally, you will learn how to use textual evidence to support your decisions and opinions about your reading.

Getting Ready to Read

Writing a Response to a Question Using Textual Evidence

Annotate for Meaning (English I Reading)