Odorants are mixtures of many different molecules. The complexity of the human sense of smell can be represented visually as a grid of 100 cells (10 x 10 grid) with each cell associated with a unique molecule-receptor pair. An odorant is detected when the brain integrates the signals generated by each molecule in the mixture.

Four olfactory sensors, each innervated by a nerve that transmits information to the brain as an action potential, are shown in the diagram at the right. Three of the sensors each respond to one of the three odor molecules in the geometric representation of the odorant mixture. 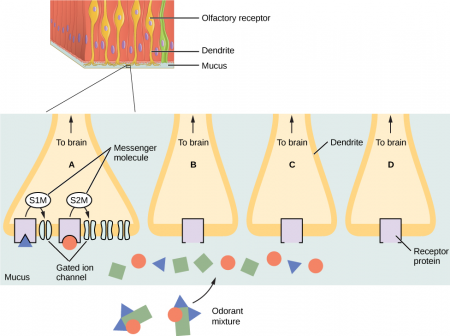 When you get cold you may shiver. The shivering response is a reflex in which the hypothalamus in the brain integrates sensory input, comparing input against a temperature set point. When a threshold signal is detected, nerves of the somatic nervous system that innervate skeletal muscle are stimulated. The extension and contraction of muscle cells releases heat energy that elevates the body temperature.