The Revised Fine Arts TEKS: An Opportunity for Program Improvement

As one teacher notes, "The TEKS help lay the groundwork for our lessons in the fine arts. They impose the order that gives our curricula their beauty."

"The arts need to be incorporated into every child's learning—not to improve test scores, but to provide individuals with the necessary tools to make and find meaning . . . for the more important purpose of enabling a future generation to participate across circumstance, culture, and time in the ongoing human conversation that is perpetuated through the arts."

Among key changes in the revised fine arts TEKS are the inclusion of dance TEKS at the middle school level for the first time, a focus on conceptual art-making rather than process learning, interdisciplinary connections, and a focus on career and college readiness. While learning in the arts is critical for students to develop knowledge of the arts disciplines themselves, the revised TEKS go beyond. The revised TEKS use the development of knowledge and skills in the fine arts to help students become better observers, learners, critical thinkers, and citizens of the world.

In May 2015, some members of the TEKS writing teams sat down to have a conversation about the TEKS development process, key differences in the original and revised TEKS in each fine arts discipline, and implications of House Bill 5 on fine arts instruction in Texas high schools. Fine arts educators Linda Fleetwood (art), Roxanne Schraeder-Arce (theatre), Lisa Roebuck (music), and Mary Lou Johnson (dance) discussed key points related to the revised fine arts TEKS implementation. Watch the panel discussion video below. These educators will provide additional insight later in this module.

By the end of this module, you should be able to demonstrate the following: 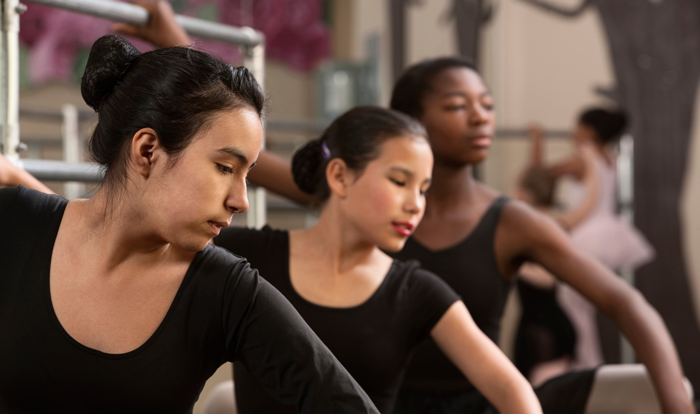 The Benefits of Fine Arts Education to Students

In education today, there is much discussion about science, technology, engineering, and mathematics, or STEM, because of the need for professionals in those fields. However, the 360 degree focus describes a foundational goal: we must educate the whole child in order for them to become whole adults. In other words, schools will produce better scientists and engineers when arts and humanities courses, along with extracurricular activities, are emphasized to produce well‐rounded children and professionals of the future.

In 2010, students with four years of arts or music classes in high school and AP/Honors courses scored an average of 68 points higher on SAT reading and 57 points higher on SAT mathematics than other students. The chart below shows a study of honors STEM students in college as compared with the average American citizen. It shows the majority of high performing STEM individuals were also involved in the arts. Authors in The Journal of Psychology of Science and Technology also studied the proposition that "scientific geniuses" are polymaths. In other words, they weren’t just scientists, but had a broad range of knowledge or learning. The finding illustrated that in addition to the sciences, they were heavily involved in arts and crafts avocations. 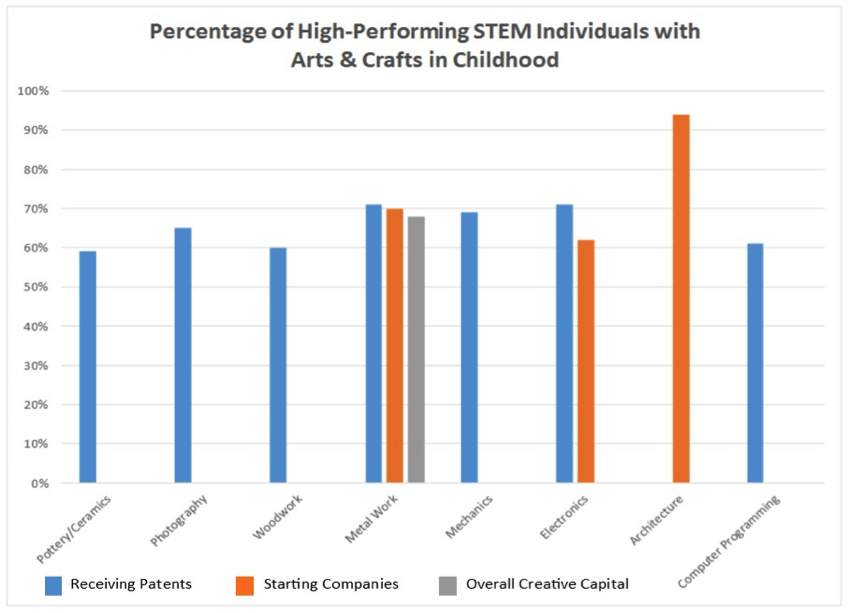 In an article in the Economic Development Quarterly, the authors state, "At present, public policy decisions often decrease or eliminate funding for the arts and cultural assets of communities, assuming that they are expendable 'extras' in a time of economic downturn. This may be a serious economic development policy error based on a set of false assumptions. Without clear knowledge of the arts' role in building general creative capacity in individuals, the long‐term costs of this approach . . . may inadvertently stifle the technology‐inventing capacity of current and future generations. This reduced capacity for invention . . . may in turn inhibit local development of an entrepreneurial, high‐tech economy capable of competing on a global scale."

Not only are the arts important for well-rounded, successful students, but the Texas Cultural Trust has done research that shows that the arts generate $5.1 billion for our state's economy now and prepare students to be key contributors to our economy in the future. The arts contribute nearly $320 million in state sales tax revenue annually. Additional findings from the Trust show that students who are active participants in arts classes have up to 15 percent higher pass rates on standardized tests than students with fewer arts classes. At-risk high school students who complete more than one art class are half as likely to drop out, and 80 percent of Texas voters support increased funding for the arts in schools.

The arts provide a vital economic engine for Texas.

This understanding of the arts in society is not new. John Adams, one of our country’s founding fathers, said, "I must study politics and war, that our sons may have liberty to study mathematics and philosophy. Our sons ought to study mathematics and philosophy, . . . in order to give their children a right to study painting, poetry, music, and porcelain." As we become an increasingly sophisticated society, the arts become increasingly important. 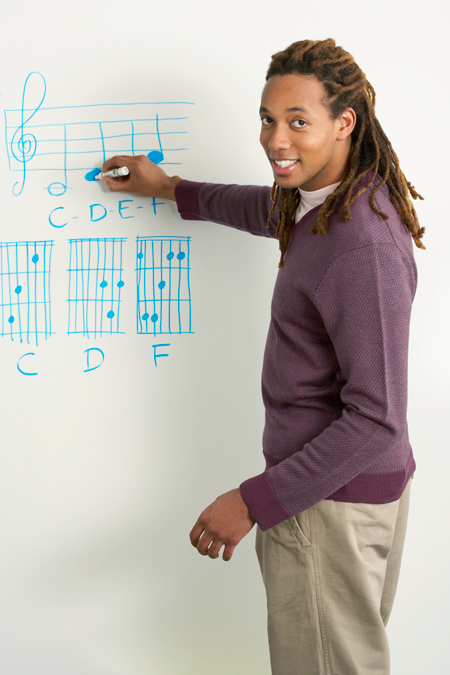 Process of review and approval by the State Board of Education

Once the TEKS review committees complete their final recommendations for revisions to the TEKS, the proposed revisions are presented to the State Board of Education for first reading and filing authorization. The Board then reviews and may, at their discretion, revise the standards during their regular meeting. If they vote in favor of first reading and filing adoption, then the public comment period opens. During this time, the public can view the proposed rules and make comments or suggestions. TEA compiles public comments and provides summaries to the SBOE prior to the following meeting when the Board may consider further changes and second reading and final adoption of the standards. If approved by the Board at second reading, the rules are filed and become part of the Texas Administrative Code.

The review and revision process takes between one to two years from start to finish. Once the proposed rules go before the Board, the process from initial discussion to final adoption is typically about four months. Proposed revisions to the TEKS for fine arts were presented to the SBOE for discussion in November 2013, approved for first reading and filing authorization in January 2013, given final approval in April 2013, and scheduled for implementation in the 2015–2016 school year.

TEA offers a variety of online professional development courses at no cost that are accessible throughout the state. Other development opportunities are also offered through region service centers and by professional educator organizations.