Engage 1: What is Organic?

Look at the pictures. Which are considered organic?

Discuss with a partner or respond in your science notebook. 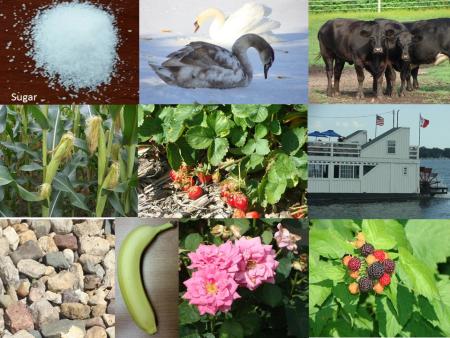 Engage 2: What is Organic?

All of the objects are considered organic except the rocks and the paddle boat. To a chemist, the term organic describes chemical compounds that contain carbon and other elements such as hydrogen, oxygen, nitrogen, sulfur, or phosphorus. For example, the pain reliever acetaminophen is organic and its chemical formula is C8H9NO2.

At the grocery store, the term organic describes foods raised under specific conditions. For example, beef labeled organic is from cows that were not given antibiotics, growth hormones, or fed animal by-products.

All of the organisms pictured are alive and composed of organic compounds.

Then why is sugar organic? Let’s find out more.

In this activity, you will determine whether each compound is an example of an organic or inorganic compound and place it on the correct side of the chart. Use the Periodic Table if you are unfamiliar with the elements' symbols. A copy of the Periodic Table is located in Related Items.

Explore 2: What do you Observe?

Discuss the following question with a partner or respond in your science notebook. What did you notice about all the compounds that are classified as examples of organic compounds? 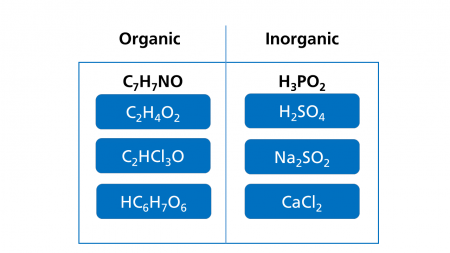 What other elements do you see that are commonly found in organic compounds? Write your observation in your science notebook. You will have a chance to revise or add to your observation later in the lesson.

Earlier when you were looking at the pictures, sugar was identified as organic. Why is sugar organic? The chemical formula for sugar is C6H12O6. The compound contains carbon, hydrogen, and oxygen. Sugar is processed from sugar cane, a plant. All living organisms contain carbon-based compounds, making them organic.

Our bodies are composed mostly of water, H2O, and it is necessary for us to survive. However, water is an example of an inorganic compound because it does not contain carbon and it was not formed by a living organism.

Explain 3: Using What You Know

Go back to the observation you wrote earlier. Based on the information in the reading, revise your observation. Add additional notes if needed.

In the following activity, you will check your understanding by identifying examples of organic compounds.

Using the observation/notes you have written, identify the following compounds as either organic or inorganic by checking the box to the left of the compound.

Compounds are frequently represented using models. For example, the organic compound urea, CH4N2O, contains a total of eight atoms. A model of urea might look like one of these.

Notice each atom of the chemical formula  is represented and is connected to another atom, showing the atoms are bonded together.

Elaborate 2: Check Your Understanding of Models

In the activity below, you will select models that represent organic compounds. Remember to use your Periodic Table!

Take the short quiz to check your understanding of organic compounds. Use your Periodic Table. A copy of the Periodic Table is located in Related Items.

Evaluate 2: Create Your Own Organic Compound

Scientists study the natural world, looking for new discoveries. Chemists look for new compounds to cure diseases, answer questions, or help develop new products. There are rules about which elements bond together and how they bond to form a compound. For example, water has a chemical formula of H2O. If the formula is changed to H2O2, the substance is no longer water, but is now hydrogen peroxide.

Imagine you are a chemist researching organic compounds. You are convinced you have discovered a new organic compound and are explaining your discovery to another scientist. Consider the notes you wrote earlier in the lesson as you complete the task. Record the response to the following questions in your science notebook.

Check your work with your teacher.

In this lesson, students identify that organic compounds contain carbon and other elements such as hydrogen, oxygen, phosphorus, nitrogen, or sulfur (TEKS (7)(6)(A)).