Monologues and Soliloquies (English I Reading)

To play the majority of videos in this section, you'll need to use the links in the Resources section and add an "s" to the http://. For example, https://www.youtube.com/watch?v=Xe9tTq4SMUI for the Taming of the Shrew video.

Click on the video below to watch Sir Patrick Stewart, an English actor who has had a distinguished career on stage and screen, give a speech.

Does this speech sound familiar? You may have recognized the reference to Hamlet’s famous words “To be, or not to be: that is the question.” In this scene, Sir Patrick presents his own version: “‘B’ or not a ‘B,’ that is the question.” One interpretation suggests Hamlet may be asking himself whether or not he should commit suicide. On the other hand, Sir Patrick’s question about whether or not a “B” is a “B” is quite a stretch from Hamlet’s dilemma, and that’s what makes the “B” speech funny.

Sir Patrick’s speech illustrates a dramatic convention called a soliloquy that authors of plays often use to enhance their texts. Sir Patrick’s speech is a soliloquy because he seems to be talking to himself, but if he had been talking to another actor or actress on or off stage or if he had been addressing the audience directly, we would call his speech a monologue. 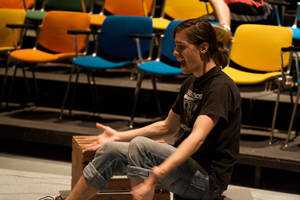 The speaker of a monologue or soliloquy is usually wrestling with understanding reality or is preparing for an expected or hoped-for confrontation. For this reason, monologues and soliloquies allow an audience to learn about a character’s thoughts, emotions, and motives through his or her own words rather than getting information from a narrator or another character. These dramatic conventions let the audience in on what a character is going to do before the other characters know. Knowing about, expecting, and waiting for things to happen add to the suspense in a drama and make the audience feel like participants instead of just observers. That said, monologues differ from soliloquies, and knowing the difference and function of each can help you better understand dramatic texts when you read them.

In this lesson, you’re going to read parts of The Taming of the Shrew, one of William Shakespeare’s famous comedies. The play begins with a framing device in which a mischievous nobleman tricks a drunken tinker named Sly into believing he is actually a nobleman himself. The nobleman then has a play performed for Sly’s diversion. This play depicts the courtship between a gentleman of Verona and a headstrong, stubborn “shrew”—Petruchio and Katharina. Katharina’s father, Baptista, is desperate to get her married. At first, Katharina is a reluctant participant in the courtship, but Petruchio seems to temper her resistance by playing with her mind and “taming” her into the role of an obedient and submissive bride. At the end of the play, however, we’re left to wonder if Katharina is the only one who has been tamed. 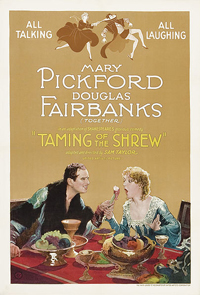 The play’s apparent misogynistic elements have become the subject of considerable controversy, particularly among modern audiences and readers. The Taming of the Shrew has, nonetheless, been adapted numerous times for stage, screen, opera, and musical theater. In productions of the play, two common methods of interpretation are often employed in order to address the controversy but still remain faithful to the text. The first is to emphasize the play’s farcical elements by poking fun at and suggesting that what happens is not in any way to be taken seriously. The second strategy is to steep the play in irony, as in Columbia Pictures’ 1929 version in which Kate, a.k.a. Katharina, (played by Mary Pickford) winks as she advocates for a woman’s submission to her husband, thus suggesting that the real taming happened to Petruchio (played by Douglas Fairbanks)! You might be interested to know that Fairbanks and Pickford were a famous Hollywood couple in the 1920s, so perhaps Pickford's playful wink was borrowing from her own life.

Monologues – Are You Talking to Me?

Soliloquies – Are You Talking to Yourself?