What is a Hypothesis?

As you learned in the lesson in this module titled "Types of Investigations," there are many types of investigations that scientists perform. We examined three types.

A hypothesis is a proposed explanation for an observable phenomenon. For a hypothesis to be used in science, one must be able to test it in the form of an experiment. The hypothesis is not just an “educated guess.” Hypotheses should be based on previous observations that cannot be explained with available information. A scientific investigation is designed to test this hypothesis.

The basic form of a hypothesis is usually similar to one of the following:

How to Write a Hypothesis

How does the amount of fertilizer affect plant growth (height)?

Look at the scientific research question above. See if you can identify the independent and dependent variables.

An easy way to write a hypothesis is to follow this simple formula.

The picture below shows the setup of the fertilizer and plant growth experiment. 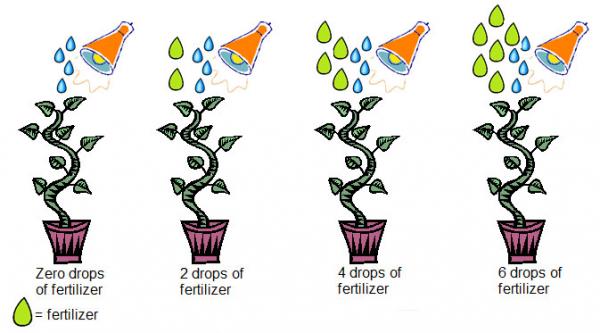 Notice there are different amounts of fertilizer (zero drops, 2 drops, 4 drops and 6 drops) being applied to the plants. These are the levels or conditions of the independent variable. The conditions or levels of the independent variable will determine the verb you add to the first part of the hypothesis. In this investigation, the number of drops of fertilizer is increasing (from zero up to 6 drops) so you could use the word increases in the first part of your hypothesis.

If the amount of fertilizer is increased, then plant growth will increase.

Sometimes you will see hypothesis written as an “as-the” statement. You would write the same hypothesis but use the words “as-the” instead of “if-then.” For example,

If the amount of fertilizer applied to plants is increased, then plant growth (height) will increase.

As the amount of fertilizer increases the plant growth increases.

Read the lab scenario below.

Watch the video and read the scenario to create a hypothesis for this experiment.

Mixing chewy mint candies with a carbonated drink such as diet cola will produce a fountain of soda that spews from the bottle. You decided to do an experiment using diet cola and different types of chewy mint candies. You decided to use a diet soda instead of a regular soda so that your clean up is easier; it won’t have the sugary, sticky residue that comes from regular sodas. Below is the procedure and results that you observed.