In September 2011, a wildfire burned over 32,000 acres in Bastrop county. Almost all of Bastrop State Park was affected by the fire. The image shows part of the park a few days after the fire. 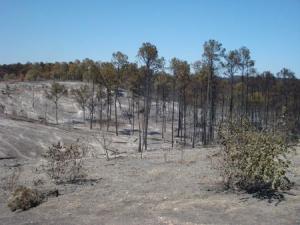 Interested in learning more? Click the image for more about Bastrop State Park and its recovery from the 2011 fire. 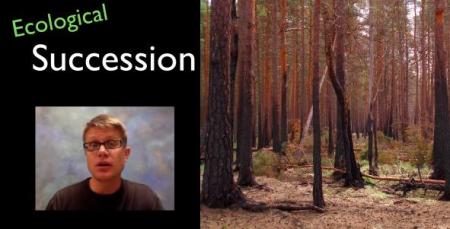 Secondary succession occurs in an area where soil already exists and life previously occurred.  Because there is already soil and because some organisms may survive a disturbance, life generally returns much faster during secondary succession.

How are animals affected by succession?

Secondary succession occurs after a disturbance in an area with plant and animal life. In addition to destroying the plant community, a disturbance may kill many animals in the area. Animals that survive may move to new areas to find shelter, water, and food.

As plant species appear during succession, wildlife will follow. Insects appear early in succession with the first plant species, such as grasses. As succession continues, small herbivores and omnivores appear, followed by larger predators.

Find links to more information about ecological succession in the View Related Resources section at the bottom of the page.

Match each ecological succession vocabulary term with the correct description. Record the terms and descriptions in your science notebook.

To retake the quiz, reload the page and then select "No" when the "Resume Quiz" dialog box appears.

Students observed a garden plot over one school year and recorded their observations in a garden journal. Instead of planting seeds, the students left this garden alone to observe what happened over time. The picture shows the garden plot near the end of the school year. 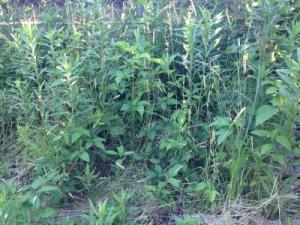 How might the garden change if the area remains undisturbed for a long period of time? Describe your ideas and/or draw a sketch in your science notebook.

Use the interactive Venn diagram to compare primary succession and secondary succession. After you place each descriptor, click "Submit" to check your answer.

To retake the quiz, reload the page and then select "No" when the "Resume Quiz" dialog box appears.

This resource is a compilation of text, videos, and other elements to create a scaffolded 5E learning experience for students. This is meant for Tier I instruction under the Response to Intervention (RtI) model for science TEKS (7)(10)(C). In this lesson, students will observe and describe the process of ecological succession.

Be sure to check for prerequisite knowledge and skills as well as differentiation needs by reviewing the entire resource and the related items before assigning it to or working through it with your students.
This resource can be used for instruction in a variety of ways.